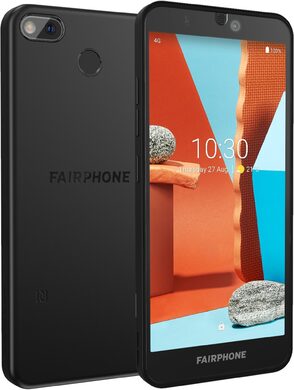 Fairphone 3+ in the news

The Fairphone 3+ is actually a Fairphone 3 but with an improved camera. Fairphone 3 owners can even upgrade their device to a 3+ by swapping the camera module. This is one of the advantages of a Fairphone, besides being the most durable phone so far.

Fairphone is the honest brand from the Netherlands that makes smartphones with care for people and the environment. To fall with the door in the house; that ideology has its price. The Fairphone phones are a bit more expensive than other phones with similar specs. But chances are they are made by people who don't get paid very nicely. With this Fairphone 3+ it's different. For example, 40% of the plastic has been recycled, factory workers have received a fair wage and there are no metals in it from conflict areas. And then the specifications are also modern. Think of a 5.65 inch screen with sharp Full HD+ resolution and sturdy Gorilla Glass 5, a 48MP camera with bright f/1.79 lens, fingerprint scanner, a headphone port, USB-C. The list goes on and on.

New camera but not a new mobile

As said before, this 3+ is a 3 with better camera. Because the sensor is bigger it catches more light. This makes your photos brighter, even in low light. Because of the faster autofocus and the shorter shutter speed, you shoot a sharp picture more often, even with movement. And because the camera module is available separately, Fairphone 3 owners can buy and instal it. According to Fairphone, a better camera is the biggest reason to buy a new smartphone. By only exchanging the camera module you save a lot of money which is not only good for your wallet but also for the environment.

Not only is the camera module interchangeable, almost every part of the Fairphone 3+ can be exchanged. Spare parts are for sale at Fairphone itself. That makes it very easy to repair. iFixit, the website where you can find repair manuals, also reviews it with a 10 out of 10. By comparison, an iPhone 11 doesn't get higher than a 6. And even after you buy it, Fairphone continues to care about you. The FP3+ is released with Android 10 but Fairphone wants to update it in the next 5 years. That also makes a phone a lot more durable. Not every year a new phone to have the latest.

Videos about the Fairphone 3+

Can you change the world with a phone? According to Fairphone, you can and the 3+ is a step in the right direction.

Fairphone introduces the 3+: an honest phone. But what does that mean exactly? An honest phone? Fairphone explains it itself in this video