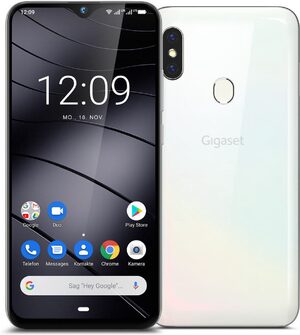 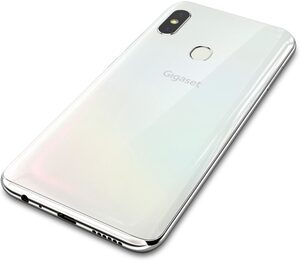 Similar to the GS290 and available

Large battery can be charged wirelessly

You may know the German company Gigaset from its home phones. In addition to these so-called DECT phones, the company now also makes smartphones. Relatively simple smartphones, but therefore inexpensive. This GS290 is right up your alley. It is a 6.3-inch smartphone with a large battery of 4700 mAh that can also be charged wirelessly. We don't see that often in this price category. Wired charging is done via a USB Type-C plug and the GS290 has support for fast charging. For this, Gigaset uses MediaTek Pump Express+ (also known as POE+). This technology is made possible by the MediaTek Helio P23 processor. An octa-core chipset from the mid-range.

The front of this GS290 is taken up by a 6.3 inch large V-notch screen. It has a nice Full HD+ resolution, which makes images and text look sharp. The colourfast IPS panel has rounded edges and a notch at the top for the selfie camera. It has a high 16MP resolution for sharp selfies and good video footage. The selfie camera can also be used to unlock the GS290. If you prefer fingerprint recognition, then that is also possible. You will find the fingerprint scanner on the back. Here is also the double camera of 16 and 2 megapixels. The latter is a depth camera and allows for beautiful portrait photos with blurred backgrounds. Gigaset calls this interplay of cameras "ArcSoft image fusion", but don't expect too much of it.

At base, this GS290 does little wrong. It is an inexpensive smartphone with some premium features like sharp screen, wireless charging and fingerprint scanner. The update policy is a bit sparse though. The device came out with Android 9 and has received an update to Android 10. An update to Android 11 is out of the question; it will not happen. And whether the device will get security updates for a long time is impossible to say. That is where devices from Samsung and Nokia have an advantage; they do have a long software update policy. Still, we can't call this GS290 a bad deal, if only because of its competitive price.

Video about the Gigaset GS290

Gigaset proudly presents the GS290. A premium designed smartphone with a long battery life and fast charging or wireless charging.