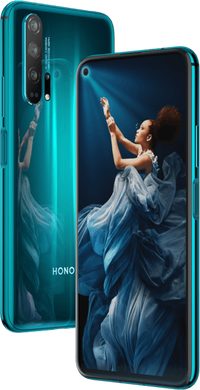 Similar to the 20 Pro and available

Suppose you're looking for a mobile with a quad camera for the best photos and videos, a large battery and a nice big screen without distractions? Then the Honour 20 Pro might be for you. In this description we'll explain all the pros and cons of the device so you'll be on ice.

The Honour 20 Pro is a beautifully designed smartphone with a modern look. That's because of its 6.26 inch large screen without any noteworthy screen edges. The 32 megapixel self-shooting device sits in a punch-hole in the top left corner. This is hardly noticeable during use, especially because the 4.5 millimetre screen aperture is very small. Honour has not mounted the fingerprint scanner in the screen like others do, but it is on the side of the 20 Pro. This has advantages because an in-screen fingerprint scanner is slower. On the Honour 20 Pro it is nice and old-fashioned fast.

On the back we find a four-person camera consisting of 48 megapixel standard lens, 16 megapixel ultra wide angle lens for landscapes and wide shots, 8 megapixel telephoto to zoom in up to 3x and a 2 megapixel macro lens for extreme close-ups. This combination makes the Honour 20 Pro nice and versatile with a suitable lens for every situation. By the way, where we wrote standard lens we actually mean a 1/2" large sensor with an extremely bright f/1.4 lens. Thanks to this wide aperture, even in the dark you shoot exposed shots, more than you can see with the human eye. So don't use that flash. And the presence of a special macro lens allows you to shoot sharp images even from 4 centimetres. Ideal for capturing fine details such as insects or jewellery.

Powerful, spacious but not without flaws

Is there anything more to tell about the Honour 20 Pro? Yeah. It is powered by a Kirin 980 processor from its parent company, Huawei, and that chip has an impressive 8 GB of RAM memory at its disposal. More than enough to have a lot of apps open and switch between them. The storage memory is 256 GB and the battery has a capacity of 4000 mAh. In other words, there's plenty of room for your content and plenty of room to enjoy it long enough. And if the battery does start to run out, it's half charged in just 30 minutes thanks to the included Honour SuperCharge charger. Is there anything the Honour 20 Pro can't do? Oh absolutely; it's not waterproof. So it's blown around water. Also, you can't expand the memory (altho that won't be necessary any time soon) and there is no 3.5 millimetre headphone port.