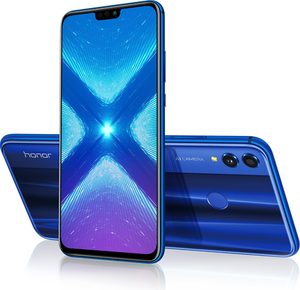 Similar to the 8X and available

The Honour 8X is a worthy successor to the Honour 8 but besides that they don't have much in common. For example, the 8X has a huge screen without screen bezels, the 8 does not. However, they both have a double camera on the back, a glass body and a powerful processor. What makes this Honour 8X really new is what we are going to find out here.

As a phone manufacturer, you don't belong there anymore if you don't release a large-screen phone. Luckily, Honour delivers thanks to its 6.5-inch FullView screen. This used to be the size of a tablet, now it fits in your pocket. All thanks to the bezel-less design that makes the housing almost as big as the screen. To still leave the 16 megapixel selfie camera somewhere, there is a small bite in the top of the screen. This notch also offers space for the speaker and sensors and is hardly noticeable for short periods of use. What does catch the eye is the back. This is made of glass with a vertical stripe on the left side, which gives a nice visual effect. The reflective glass consists of no less than 15 layers and is available in different colours. Unfortunately it is not waterproof.

Able to play along

Honour praises the 8X as a powerful phone. This is primarily due to the Kirin 710 processor. Whoever now compares the Honour 8X to the Honour 8 is that the latter is still equipped with a Kirin 950 chip. And 950 is higher than 710 so maybe better, faster, more powerful? We have to add a nuance to that; the Kirin 950 is 3 years old when the Kirin 710 was announced. And in chip time it's centuries. Moreover, the Kirin 710 is made at 12 nanometres while the 950 is made at the much larger 16. This makes it a little more energy efficient and at least as fast as the 950 which is clocked a little higher. But the most important thing is that the Kirin 710 has a much better graphical performance. You can see that in gaming. So it's no surprise that Honour promotes the Honour 8X as a gaming phone. The GPU Turbo must ensure constant frame rates so images don't falter and always remain smooth.

Shoot on and on

On the back of the Honour 8X we find a double camera; a 20 megapixel main camera with a second 2 megapixel sensor for recognising depth. Combined with the necessary artificial intelligence it recognises what you want to photograph and adjusts the settings itself. Thanks to the maximum lens aperture of f/1.8, the camera can still see well in the dark, resulting in beautiful nite shots without having to use the flash. Thanks to the second camera, you can make backgrounds blurry, which is especially nice for portraits. With the 8X, it is also possible to make the background completely black, making it look as if you have shot a photo in a studio. The built-in battery has a capacity of 3750 mAh which is enough for more than a day of use. You don't have to worry that you won't make it thru the day.