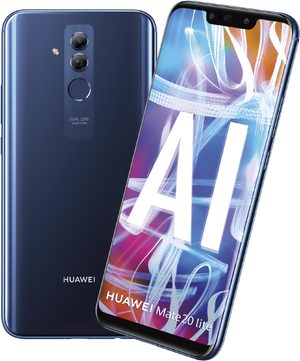 The Huawei Mate 20 Lite is a large and powerful device that should appeal to a young business audience. Huawei hopes to do that by making it smart and attractive. Whether it is beautiful is up to you, he seems smart. That's because of a lot of artificial intelligence function. We will investigate whether this will be of use to you in practise.

If a company, in this case Huawei, frequently uses the term AI in its mouth, we usually sound all the alarm bells. It is usually a rather empty slogan, such as machine learning, big data and blockchain of which the marketing department has heard the bell ringing but doesn't know where the clapper is. Artificial intelligence on the Huawei Mate 20 Lite is mainly used in the camera app. By analysing and comparing 500 scenarios even before you take a picture, the best one is chosen with the corresponding settings. The result should be a nicer picture. This used to be called the automatic mode, now it's called the AI camera and it's usually nothing more than marketing. In that respect, what you immediately benefit from is the double camera sensor. The 20 megapixel camera is accompanied by a 2 megapixel camera. This camera is not there to capture more detail or sharpness but to see depth. The Mate 20 Lite knows what is in the foreground and what is in the background. By taking the background out of focus, professional looking photos are created.

Clever powerhouse thanks to AI and Kirin 970

At the front are also two cameras, this time of an even higher 24 megapixel with 2 megapixel. Of course, razor-sharp selfies are guaranteed again with the necessary AI-violence for invisible improvements that, as a matter of fact, you shouldn't notice. All this artificial intelligence is provided by the fairly powerful Kirin 710 processor that performs calculations at lightning speed. The availability of 4 GB of RAM memory is sufficient to quickly change apps, for example. This chipset is powered by a 3750 mAh large battery. Such a large battery is no superfluous luxury considering the 6.3 inch screen size. Fast charging is possible so you will never be without power (for a long time). At the top of the Full HD+ screen is a notch in which the double selfie camera is located. Admit it; you have to luv a notch altho it does give you a modern look.

Huawei has equipped the Mate 20 Lite with Android 8.1 Oreo as standard. On top of this runs EMUI 8.2 in which Huawei, how could it be otherwise, again stopped some AI function. Walk into an elevator while calling and the Mate 20 Lite puts your call on hold instead of rudely disconnecting it. When you get out of the elevator the call will be picked up again. And when you walk into a busy room the other party hears you well thanks to noise cancelling. The Mate 20 Lite swallows no less than two SIM cards to put all your business on the right track. You have to share this second slot with the memory card slot. You have 64 GB of memory, which should be enough at first. More data can always be stored in the cloud, which can be accessed quickly thanks to Wi-Fi ac and 4G support. With this, it seems to have everything you need to be successful.