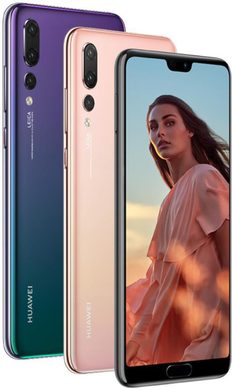 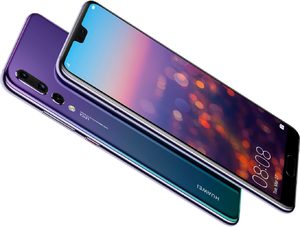 The Huawei P20 Pro is Huawei's most comprehensive, say, most professional smartphone for 2018. The camera has not 1, not 2, but 3 cameras on the back with a total resolution of 68(!) megapixel. That's not just to grab your attention, it should provide clearly sharper and clearer photos and videos. We are going to try to find out if that is possible.

But before we zoom in on the camera we first take a look at the housing. As with the P20, Huawei was obviously inspired by Apple. Where have we seen that notch before? Right, Apple also applies a similar notch to the iPhone. Huawei places the selfie camera and sensors there. In this way it is possible to pull the screen almost to the top. At the bottom of the screen there still seems to be some space left, but Huawei uses that for a home button with integrated fingerprint scanner. We think it's clever that Huawei manages to surprise us with a refreshing new colour version. They call it Twilight and it is a transition from green to purple. It looks successful, it is innovative and as far as we are concerned, other manufacturers are allowed to use it as well. Besides Twilight also Pink Gold has a similar colour gradient, the other colour versions are solid in colour. What a pity is that Huawei does not want to switch to 2K-resolution displays. Even the screen resolution of this P20 Pro model remains stuck on Full HD. That makes the screen not as sharp as some competitors.

But enough about the looks and his screen, time to look at the camera. Huawei applies no less than 3 sensors at the back this year. At first you would think that this is pure marketing but appearances are deceiving. Huawei has had help from Leica and they know a lot about photography. The most important camera measures 40 megapixels, is equipped with a colour sensor and has an f/1.8 lens. That means he can see a lot of detail. The nice thing now is that this sensor gets help from a 20 megapixel black and white sensor. This one has an even more light sensitive f/1.6 lens. These two sensors combined make such impressive photos, especially in fairly dark conditions, that DxOMark's testers give it a score of 109. Not only is this the highest score ever assigned to a smartphone when the P20 Pro is released, it is also the first time that a mobile phone has passed the magic limit of 100. Where other manufacturers use two cameras to zoom in, Huawei uses it to take better pictures. In order to be able to zoom in this year without loss of quality, Huawei is using a third camera on the P20 Pro; an 8 megapixel telephoto zoom lens with an aperture of f/2.4. This allows you to zoom in optically up to 3x without loss of quality and up to 5x thanks to hybrid zoom. Movements are automatically compensated for by optical image stabilisation on all three cameras. The result is sharper photos, with more detail, true-to-life colours, predictive focus, excellent nite shots and slow-motion videos. In other words, the Huawei P20 Pro is a real camera beast.

Huawei equips the P20 Pro with a proprietary Kirin 970 processor. Special about this chipset is its built-in NPU. This is the abbreviation of Neuronic Processing Unit that adds artificial intelligence. It's useful for automatically selecting the best camera settings and enhancing photos and videos. All that extra processing power comes in handy with Augmented Reality, also known as AR. This allows you to project images across the camera. Think of an Ikea app to place a chair in your living room, just to see if it's there before you buy it. All that extra power is only useful if you have enough stamina. That's why Huawei equips the P20 Pro with a 4000 mAh battery that has fast charging. In order to be able to switch apps quickly, having sufficient RAM memory is essential. Fortunately, there is as much as 6 GB of RAM available, which is more than many competitors. There is also 128 GB of storage memory, which unfortunately cannot be expanded by inserting a memory card yourself.