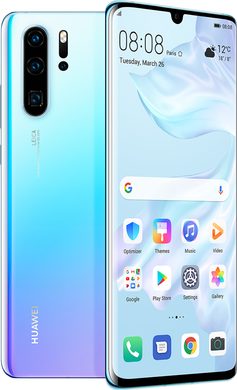 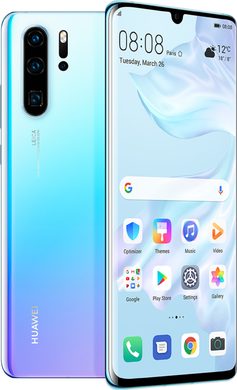 The Huawei P30 Pro was announced at the beginning of 2019 and solves one of the biggest problems that camera phones have been facing for years: being able to zoom in without loss of quality. Whether Huawei has cracked the code with the P30 Pro and what else you can get with the device is something we will explain for you here.

First, let's talk about his casing. Huawei put the P30 Pro in a nice jacket of rounded glass that is available in many colours. The new front consists of a 6.47 inch OLED panel with a drop-shaped notch at the top for the selfie camera. The OLED technology creates bright colours that splash off the screen. At the bottom of the screen is the fingerprint scanner. Laying your finger on it scans it, altho you can also unlock the P30 Pro via facial recognition. The screen is even used as a loudspeaker while talking on the phone. Being able to leave out a traditional speaker gives you a higher water resistance, cleaner look and a smaller screen border.

But if you're considering a Huawei P30 Pro, of course it's because of your camera. Huawei calls it the "Super Camera System" for a reason. It consists of a 40 megapixel Super Sensing Camera, 20 megapixel super-wide-angle lens, a super zoom lens and a ToF depth of field camera. The first one is for every-day shooting but with extra detail. Huawei has greatly improved light sensitivity by using a RYYB sensor. The green subpixels have been replaced by yellow ones, so that it absorbs 40% more light. That combined with a maximum ISO value of 409,600, you can still take visible photos in almost complete darkness. You can even capture the starry sky. But as far as we are concerned, the SuperZoom lens is the most interesting. It gets images 5x closer without loss of quality, 10x hybrid and 50x digital. That is enough to get the moon in the picture recognisable. Unprecedented for a mobile phone.

Not to mention the ToF depth camera. It is better able to distinguish the foreground from the background, which results in more beautiful portraits. But the selfie camera also impresses. It is equipped with 32 megapixels for sharp shots with a lot of detail. Thanks to the processing power of the Kirin 980 processor, the P30 Pro also knows how to deal with backlight. This gives you better exposed selfies with more realistic looking colours. For the sake of convenience, forget the macro mode for close-up shots, AIS Long Exposure Shot for mysterious effects and wide angle lens for nature shots. In other words, the Huawei P30 Pro is every photographer's dream. Altho the necessary artificial intelligence also helps in the background to take good photos and videos. One that lasts a while thanks to a battery of 4200 mAh thick. It even recharges quickly and wirelessly. It doesn't stop.