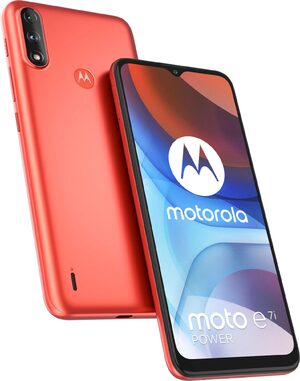 84,99Starting from
With contract from 12,- p/m
Select storage and colour

So, is the Moto E7i Power a phone with a big battery or a battery that lets you make calls? We tend to lean towards the former because while a 5000 mAh big battery is big, these days you have phones with bigger ones. Even up to 6000 mAh. Motorola won't go that far, but the E7i Power does have a long battery life. Up to two days, or 40 hours on one charge. Enough to stream video for 19 hours, listen to music for 78 hours or surf the web for 14 hours. Once empty, the E7i Power needs some rest. Fast charging is not available, so a full recharge will take several hours.

Marathon runner, not a sprinter

Inside the Moto E7i Power is an SC9863 processor from the relatively unknown UNISOC. This is not a very powerful processor for simple use. The term 'Power' is therefore mainly a reference to the battery and not so much to its performance. In order to still be able to run the Android operating system smoothly, Android Go-edition has been used. This is a stripped down version of which the apps do not take up much space. This does come at the expense of some functions, which will have been stripped down here and there. The E7i Power should mainly be seen as an entry-level phone with basic functions but with a long battery life.

The E7i Power features a 6.5-inch display with HD+ resolution, a 13MP main camera with 2MP macro lens, a headphone jack and a fingerprint scanner on the back. There's even an official IP rating for waterproofing: IP52. That stands for "water resistant" so full head down we don't recommend. On the right side of the phone is a special button with which you can call up the Google Assistant. You can give it voice commands such as "what is the cheapest Motorola phone?". It is a shame that the E7i Power has so little memory: 32GB. Fortunately, that is expandable with a memory card. The phone accepts cards up to 512GB.