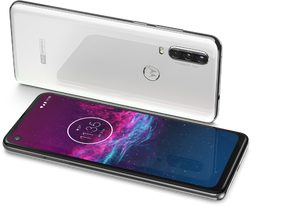 Similar to the One Action and available

All Motorola One Action reviews

The Motorola One Action is an Android One running phone with a triple camera on the back. What's special about it is that you can shoot video vertically and still look back horizontally without bars. What that means and what problems this prevents, we would like to explain here.

Suppose you see something nice and want a video of it. You quickly grab your mobile and start filming but instead of horizontal you hold your mobile upright. These will soon become thick bars left and right when you want to watch it on your TV or PC. But not with Motorola's One Action. Even its video camera has an ultra wide angle lens that means you'll never have bars again, no matter how you hold your mobile. And to make One Action a real action camera, there's image stabilisation that shocks your videos even in challenging conditions.

Motorola One Action is all about its video camera, but you get a lot more. A 6.3-inch CinemaVision screen, for example, with a neat Full HD+ resolution for sharp images. This screen has the ideal film format of 21:9; just like in the cinema. Content can be stored carefree on the 128 GB large storage memory. That won't be empty any time soon. Especially because you can store unlimited photos on Google Photos. That's because the One Action is part of Android One. In addition to unlimited photo storage, it guarantees you monthly security updates and a few Android upgrades to keep your mobile safe for a long time to come.

In addition to videos, the Motorola One Action is also suitable for photography. On the back is a triple camera system consisting of 12 megapixel primary camera with f/1.8 lens, 5 megapixel depth camera and a Quad Pixel camera with ultra wide angle lens. It shoots portraits with background blur, slow motion videos up to 120 frames per second and panoramas. The front camera has 12 megapixels and sits in a hole at the top left of the screen. The sound is also thought of because there is support for Dolby surround-sound. The battery is with 3500 mAh on the spacious side and there is even fast charging up to 10 Watt. Be careful when you are near water. The IPX2 rating only makes it splash-proof. So there is no submersion.

All Motorola One Action specifications