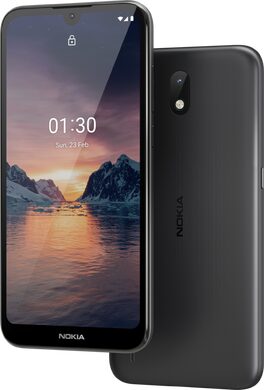 Nokia 1.3 leaked, it doesn't get much simpler than this

The Nokia 1.3 is an entry-level model with a correspondingly low price tag. Yet the 1.3 promises to have everything to be a full-fledged smartphone. How exactly is something you read here.

The Nokia 1.3 is one of the cheapest Nokia phones you can buy. You should be aware of that, because in order to get to such a low price, certain things have been left out. You may mind, while others don't even notice it. In order not to be part of the first group, we would like to explain a bit more about him. At the front of the Nokia 1.3 we find a 5.71 inch screen with HD+ resolution. This is a nice compact screen that can still display images sharp enough. The back is made of plastic and can also be removed to replace the battery. With 3000 mAh on paper, that battery is big enough to last a day. It doesn't need to be charged quickly, so don't forget to put it on the charger every nite.

Despite the fact that the Nokia 1.3 runs under Android, it uses Android Go, which is a stripped down Android version that should be able to run smoothly on simple hardware. The Qualcomm 215 processor is about the simplest chipset Qualcomm makes. You shouldn't fire at him much more than every-day tasks. So gaming isn't going to be it unless it's simple puzzles. The advantage of Android Go is that updates are guaranteed for years to come.

On the back of the Nokia 1.3 we find a single 8 megapixel camera. This is enough for every-day snapshots you take during the day. In the evening, you will quickly need help from the built-in LED flash. Nokia hits itself on the chest that the 1.3 has AI imaging that allows you to take good photos even in low light, but we have some comments about this. Do not expect miracles. In itself, this does not have to be a problem if you are simply looking for an inexpensive entry-level smartphone without a lot of fuss. If you are, then the Nokia 2.4 is a good alternative.

Video about the Nokia 1.3

A smartphone for less than 100 euros that you can also use? The Nokia 1.3 should make that impossible task possible

Complete comparison between the Nokia 1.3 and these alternatives or compare with other models