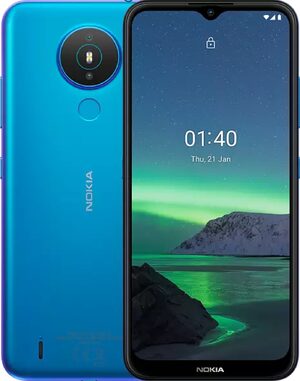 The Nokia 1.4 is one of the most affordable Nokia smartphones at the moment. And yet, it has many features you would expect from a more expensive smartphone. This makes a full-fledged smartphone accessible to everyone.

The Nokia 1.4 is a smartphone that is made by the Finnish HMD Global. They have obtained the right to release phones under the name Nokia. Despite that, the Nokia 1.4 has the same quality you can expect from Nokia's past. The front is protected by Panda Glass, and the back is made of sturdy polycarbonate, also known as plastic. At the front of the 1.4 is a 6.517-inch HD+ screen. That's big for extended use and sharp for most. At the top of the screen is a V-shaped notch, a notch, for the selfie camera. This is 5MP in size, making it sufficient for easy use.

On the back of the Nokia 1.4, we find no less than 2 cameras; an 8MP main camera with various modes and a 2MP macro camera for close-ups and portraits. In the middle of the round camera module, we also find a single LED flash for when it gets too dark. On the back is also where we find the fingerprint scanner. This secures your device with your own unique fingerprint. Behind that fingerprint scanner is a large battery with a battery life of 2 days (with average use). No wonder because the capacity is a large 4000 mAh. Take some time to fully charge it though; there is no quick charge function available.

All in all, you wonder how HMD Global managed to put out such a cheap smartphone. This is largely due to the standard specifications but mainly due to the entry-level processor. The Qualcomm QM215 is not the most powerful processor. Something has been found for that. Instead of using the full version of Android, they chose the stripped down Android Go. This allows you to do exactly the same as the full Android, but the system applications such as messages, mail and browser are a bit simpler. This also means that only 1 GB of RAM memory is needed. Don't be fooled by this, for Android Go phones this is sufficient in most cases.

Video about the Nokia 1.4

Everyone should be connected. But that starts with an affordable smartphone. The Nokia 1.4 is just that, and more.

Complete comparison between the Nokia 1.4 and these alternatives or compare with other models