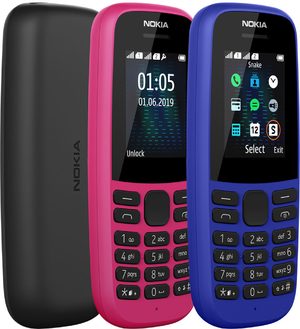 This 2019 Nokia 105 is a Dual SIM phone with built-in radio and flashlight. And thanks to its simple character, it lasts for days and is reasonably cheap. Ideal as a backup phone, but sufficiently equipped to serve for daily use.

Preferably for phone calls only

The Nokia 105 (2019) Dual SIM is a phone that is primarily intended for making calls. With a specified talk time of over 14 hours, it leaves other modern phones far behind. Something you especially see when you look at the standby time. According to Nokia it has a standby of 25 days. But then you have to leave him alone. If you don't do that and just use it, you should be able to make it for a week. That underlines the strength of the 105 2019; an unprecedented long battery life. It also reveals its weakness because the long battery life is largely due to the lack of many functions.

No apps, but with radio

For example, the 105 (2019) Dual SIM does not have the ability to run apps such as WhatsApp or Facebook. It also does not have a camera to shoot pictures. However, it does have an FM radio that only works if you plug in the headphones. That must be your own headphones because there is none in the box. This is not a bad thing because the 105 has a 3.5mm audio-plug input. At the top is a flashlight that can be useful in the dark. Also the nostalgic game Snake is installed with which you can kill time. But above all, the 105 is a very normal and simple phone with not too many functions. This makes it ideal as an emergency phone or as a prepaid mobile.

Double sim but not very adventurous

The Nokia 105 2019 Dual SIM has been released in 3 different colours but it's just a matter of finding out which one is currently available. It's a bit of a challenge if you want to take it across national borders; it only supports Dual Band. Phone networks in Asia and America use different bands. European countries should not be a problem. You can also insert 2 different SIM cards into this 105 Dual SIM. These must be of the mini-SIM type that are a bit larger than you are used to with modern smartphones.