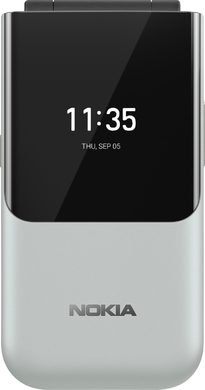 The Nokia 2720 Flip may look a bit old fashioned, but it was announced in 2019! It's equipped with modern features like 4G and an app store where you can find apps like WhatsApp and Facebook. It's a remake of the 2009 2720 Fold and Nokia's nod to today's new modern foldable phones

Simple but not stupid

The 2720 Flip is a simple phone but therefore a reliable one. It is a remake of the classic folding phone of yesteryear with large buttons and a folding mechanism for satisfying hang up phone calls by folding it shut. And no matter how old-fashioned this all sounds, its modern features make it totally up to date. For example, you can quickly browse the web on the go with 4G, use WhatsApp and give voice commands by using Google Assistant.

Retro but also for seniors

So the Nokia 2720 Flip is a folding phone consisting of two parts; a screen and a numeric keypad. The latter consists only of numbers. You can enter text by pressing a number several times, or via T9, which allows you to 'guess' words by pressing a number only once per letter. There is no touch screen. The screen measures a diagonal of 2.8 inches which is nowadays considered 'small'. When folded down, there is also a screen on the outside for time and notifications. The buttons and text are nice and large. This allows the 2720 Flip to also serve as a senior phone. Also because it is nice and simple without extensive menus and unnecessary functions. There is even a special button on the side to send a message, ideal for emergencies. The Flip can also ring up to 5 contacts until someone answers

Despite its simple appearance, the Nokia 2720 Flip is a full-fledged smartphone. That's because it runs the KaiOS operating system, which is also suitable for apps like WhatsApp and Facebook. None of this has a negative impact on its battery life. It's large and old-fashioned. Nokia itself quotes a duration of 28 days, but you are not going to achieve that in real life. Still, several days should be feasible. Ideal for those who sometimes forget to put their mobile phone on the charger for a nite.

Video about the Nokia 2720 Flip

HMD Global breathes new life into a Nokia classic once again. This time the 2720 Flip. The flip phone is back!