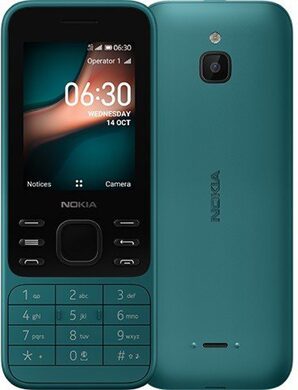 The Nokia 6300 4G is a simple looking phone but one you can still use in the 21st century. It has 4G support for fast mobile browsing, WiFi, it is compatible with WhatsApp and Facebook, and it understands voice commands thanks to the built-in Google Assistant. But the 6300 4G also has limitations. We'll explain it here.

Anyone who looks at the 6300 4G for the first time will think "what is that?!". HMD Global (the makers of this Nokia 6300 4G) like to call the device a "conversation starter". Ideal to break the ice with. Maybe literally, because it reminds you of the old, solid brick Nokia's from the past. Indestructible and with an impossibly long battery life. This 6300 4G is a modern remake of the original Nokia 6300 from 2006, but with 4G. It has an old-fashioned numeric keypad on the front, and a touchscreen is not included. It does not seem suitable for long emails, but the built-in Google Assistant support allows you to dictate emails.

Despite its outdated appearance, the Nokia 6300 4G does offer modern features like WhatsApp and Facebook. You might not think it, but the 6300 4G is a smartphone that runs under KaiOS. It is a relatively simple operating system, but one with its own App Store from which you can instal apps. Besides 4G support for internet on the go, there is WiFi support for mobile home. YouTube videos can therefore be watched, altho the 2.4 inch screen will not be very ideal for long videos. If we turn the 6300 4G around, we even see a camera. It is an extremely simple one with a VGA resolution. That is less than 1 megapixel. Nokia has remained nostalgic in this regard.

But who is it actually for?

The battery doesn't seem big at 1500 mAh but since there aren't many power-hungry components, it lasts relatively long. It is also replaceable in the old fashioned way. There is also a headphone port for headphones. Plug those in and you can even listen to the radio. This makes the 6300 4G a basic phone with enough functions to last for several days. Perhaps the ideal festival phone, or emergency phone for the glove compartment. For camping, as a WiFi hotspot, or as a beginner's phone for your child. And the price is no problem, because it's not very expensive.

Get back to basics, but stay socially connected, with the Nokia 6300 4G. A very simple phone but still with social media apps