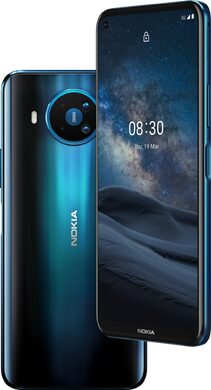 The Nokia 8.3 is Nokia's very first 5G phone. It is also a huge phone. With a length of 171.9 millimetres, you can hardly get around it. Literally. Time to take a closer look at this phone.

PureDisplay screen with some delay

It took some time before the Nokia 8.3 5G came in the shop. It may have had something to do with its supporting role in the James Bond film 'No Time to Die', which was originally due to be released in April 2020, but because of the Corona virus it wasn't released until November. And so did this 8.3. Anyway, better late than never. It's Nokia's first 5G phone and one with a remarkably large 6.81 inch screen. This doesn't make it very inconspicuous, but it is ideal for viewing content. Nokia uses a so-called PureDisplay, which is actually just a calibrated screen. This is not an OLED screen, which is known for its bright colour reproduction and high contrast values. The applied resolution is Full HD+ and the screen ratio is 20:9. In the upper left corner there is a hole for the selfie camera. At the bottom of the screen, there is still a relatively large amount of space that is used for the Nokia logo.

Inspired by the Northern Lights

The Nokia 8.3 5G is made entirely of glass, except for the frame. The colour version 'Polar Nite' is inspired by the Northern Lights, and thus the Finnish roots of Nokia still shine thru in this device. The fingerprint scanner is located in the power button on the right side, with a special button on the left to instantly call up the Google Assistant. Just like all other modern Nokia's, this Nokia 8.3 also runs under Android One, which puts you at the forefront when it comes to software and security updates. You even get 2 promised updates to a new Android version. Android One also keeps your phone reasonably clean so it is not hindered by bloatware (apps you don't use). For the first 3 months you get a trial subscription to Google One with 100 GB of cloud storage where you can store all your photos, documents and mail.

Nokia often works together with Zeiss to provide the cameras with good quality. This is also the case with this 8.3 5G. The quadruple camera is not only equipped with Zeiss lenses, but also with Zeiss movie effects that you can add to videos. This gives your movies a cinematic effect. Videos can be shot in pin-sharp up to 4K and with 360-degree spatial sound thanks to OZO audio support. But the 8.3 5G is also good with photos. Partly responsible for this is a 64MP camera sensor. Partly responsible for this is a 64MP camera sensor, which is supported by a 12MP ultra-wide-angle lens, 2MP depth camera and 2MP macro lens. Zoom is missing on the 64MP large sensor, so you can zoom a bit without quickly noticing it. All your creations can be quickly launched on social media thanks to the 5G support. This allows you to achieve down- and upload speeds you could only dream of before. Provided you have a 5G subscription and range, of course.

His gigantic appearance doesn't seem like the most suitable phone for a spy, but this 00-agent thinks otherwise. According to her, the Nokia 8.3 5G is the only gadget you need

Complete comparison between the Nokia 8.3 5G and these alternatives or compare with other models