Nokia released a device in almost every segment last year and the top model is the Nokia 8. It is now available for less than 500 Euros and seems to offer quite a bit of value for money. High time to find out.

The Nokia 8 has a 5.3 inch screen with Quad HD resolution. Nokia has never released a phone with such a high screen resolution before. In total, the Nokia 8 has three cameras, each with a 13 megapixel sensor. Furthermore, the camera is equipped with a Snapdragon 835 processor and 4 GB working memory.

A brand that takes a similar approach to the Nokia 8 in terms of price and specifications is OnePlus with the 5T. There are also the LG G6, Samsung Galaxy S8 and Huawei P10. These all have a different look for Android and Nokia keeps it as pure as possible.

The differences in design between the Nokia's that came out in 2017 are minimal. The most important difference is of course the size. Furthermore, the devices have little embellishment and the flagship is no exception. On the 8 we see again a metal unibody with a glass plate slightly on top. The build quality is therefore completely des Nokia. The top and bottom of the 8 are also largely filled with plastic to improve the reception of the antennas. In our blue version, this plastic has a slightly purple tint, but that is only noticeable in clear, direct light. 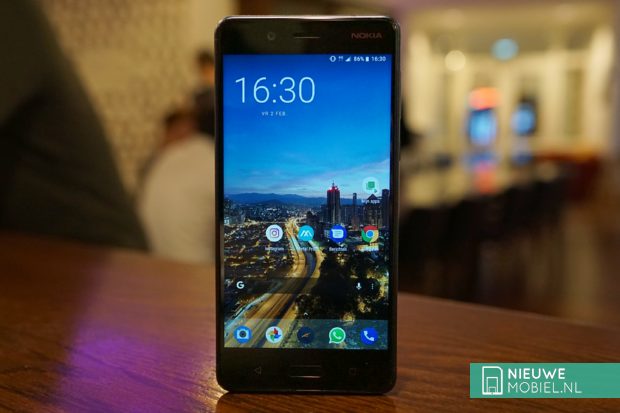 Beneath the screen we find, in addition to the fingerprint scanner, two capacitive buttons for operating the device. The fingerprint scanner serves as a home button. This has the advantage that you can use the entire screen surface to display content from apps. Disadvantage' is that you have to wring your thumb in slightly harder bends to operate the buttons and the buttons are quite far below the screen. The illumination of the buttons can be set from a few seconds to always on. 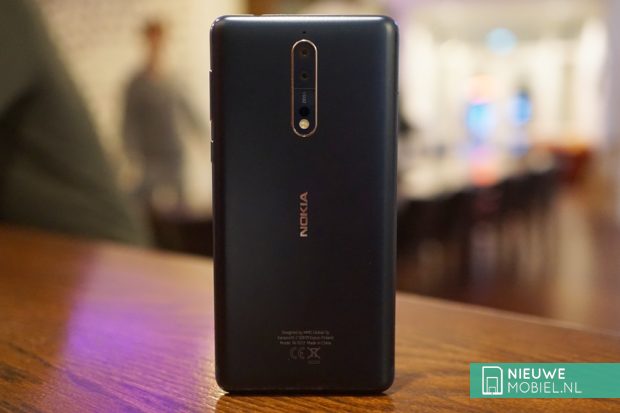 Above the screen there is almost as much space as below but this is used a lot less effectively. Of course this is where the self-image camera and ear-speaker are, but Nokia didn't bother to place a notification light. That this is really a shortcoming will be explained later in this review. Fortunately, the edges next to the screen have been kept quite narrow.

The device has virtually no sides because the front goes seamlessly into the bulge of the back. As a result, the device feels very thin and the hardware buttons on the right side are slightly angled backwards. This is not a problem for the operation, but the volume buttons are in a very clumsy place. Namely so high up on the device that you can never really reach it. For right-handed people it's still a bit tricky with your thumb, but while talking on the phone you have to manoeuvre a lot to adjust the call volume. The buttons do have a nice click and a nice chrome rim all around.

The SIM card and a microSD card can be inserted into a drawer on the left side of the device. At the top Nokia has also placed a headset jack on its top model. The USB-C port is located at the bottom, as is the speaker.

The back is completely flat with the camera module protruding about one millimetre. Around it is a chrome-coloured rim and the glass that lies over the cameras and flash unit consists of two parts. The Nokia logo is inlaid in the metal. On either side of the 8, the sides are slightly more slanted than at the top and bottom. This makes the camera very comfortable to hold. The metal offers little grip. With a screen-to-body ratio of 69.4%, the Nokia 8 does not really meet the current beauty ideal for flagships with their front-filling screens. Still, the device doesn't feel overly clumsy and the screen is still easy to operate with one hand.

On the inside, the Nokia 8 is in every respect a top model according to current requirements. With a Snapdragon 835 processor and 4GB of working memory, it is not or hardly inferior to the competition. In addition, the 8 is equipped with a battery with a capacity of 3,080 mAh. That doesn't seem very generous for a device with a screen resolution like the Nokia 8. However, in practise it appears to be very efficient and we were positively surprised. A usage time of two to 2.5 days was no exception. In addition, we had a screen on time varying from six to 7.5 hours.

The screen also meets the requirements of modern times. A Quad HD resolution is not very exceptional anymore, but Nokia does stuff those 2560 × 1440 pixels into a relatively small 5.3 inch screen. This brings the screen to a pixel density of 554 PPI and therefore the image is very detailed. Contrast reproduction is fine and colours are displayed quite vividly in front of an LCD screen. The maximum brightness of the screen is nice and high and the automatic brightness makes good use of the entire range. Altho you sometimes have to adjust it a bit manually.

There is also a nite lighting setting. This gives the screen an orange tint so that it is more pleasant to read in the evening. This can be switched on automatically at a fixed time or at sunset. The screen can also be activated by tapping it twice. This works reasonably well but sometimes you need an extra attempt.

When taking the Nokia 8 into use, we immediately received an update to Android 8.0 and Nokia was one of the first manufacturers to take this step. During our test period, the device was neatly provided with the monthly security updates and Nokia also started rolling out the beta for Android 8.1. This is praiseworthy fast because until then, only Google's devices had this at their disposal.

At first glance, the Nokia seems to run on a pure version of Android. Even more so than is the case with Motorola's devices. Nokia does use its own launcher. This is the part of the interface that relates to the start screen and the app menu. That may look almost the same as on pure Android, but Nokia has taken a number of functions out of it. For example, you cannot disable notification dots and the automatic addition of a new app to the start screen. The notification bubbles as we saw earlier on the Nokia 5 with Android 7.1 have now been replaced by the standard version of Android 8.0.

In addition to its own launcher, Nokia adds another support app to Google's standard app collection. This is updated on a regular basis and at a certain point also received a section for a device monitor. Here you can view memory usage, free storage, data usage, device temperature and battery status. Nicely done but it doesn't really add anything. On top of that, we received a number of unsolicited pop-up requests for feedback and whether we would recommend the device. This seems to come from this app as well.

Nokia has also replaced the always on-display with its own version. This listens to the name Glance and when locked at the top of the screen shows the battery status, time, date and counters for missed calls, mails and messages. However, Nokia only understands 'messages' as SMS and not messages from WhatsApp, Telegram and/or Facebook Messenger. In addition, notifications from other apps such as news or social media are also not visible. These shortcomings are further emphasised by the absence of a notification light on the Nokia 8. If you have left your device unguarded for a while, the only way to know if you have received new apps or notifications is to activate the screen. A small patch on the wound is that this can be done relatively quickly by tapping the screen twice.

To date, the Nokia's have a fingerprint scanner under the screen. This seems to change in 2018, but also on the Nokia 8 it is in a place that should be easily accessible for everyone. It is not very large, but functions properly. The scanner gives one short vibration signal when your fingerprint is recognised, and two in quick succession when that is not the case. This is useful because after recognition, it still takes quite a long time before the screen wakes up. In the meantime, the capacitive buttons first light up. Apart from the fact that it also serves as a home button, the scanner has no extra functionality.

As said, the 8 at the back is equipped with two 13 megapixel cameras. One of them captures images in colour and the other in black and white. A lot was expected from the cameras on the Nokia 8 beforehand. This was partly due to the renewed collaboration with Carl Zeiss, which had yielded illustrious camera performances from Nokia in the past. Moreover, Nokia itself also blew off the tower about the possibilities of the camera. Such as the "bothie" function, where you take a photo at the same time as the camera at the front as well as the back.

When starting up the camera, the interface can be a bit disappointing. Also, some poor translations into Dutch may appear. The flash and HDR can be set directly in the picture with an automatic mode for both. There is an option to set whether photos should be taken with both cameras at the back or one of the two. The usefulness of this is a bit unclear because changing photos to black-and-white afterward is just as easy and you undo the added value of having two cameras at your disposal. With a button above/beyond the shutter release button you can switch between shooting modes with a choice of updating, panorama, photo, live bokeh and manual. The latter refers to manual mode with more setting options.

In the settings menu you will find a lot of extra options. For example, the viewfinder screen can also display information for compass, altitude, spirit level and guideline. For photos, compass, height, watermark and location can be saved.

Once you are ready to take a picture you immediately notice that the camera does not perform as expected. In spite of laser autofocus, focussing is terribly slow. You can change the focus point by tapping somewhere on the screen after which a square starts blinking. In day-light, photos are fine, but there is still a lot of room for improving exposure, contrast and detail. When there is less ambient light, the quality quickly decreases and exposure and detail are weak spots in particular. The shutter speed is running so that images are moved quickly. The photos of the self-image camera are not inferior to those on the back. This seems disappointing after the above criticism but is more than sufficient for selfies. For video, 4K is the maximum resolution. Sound recording for video is a strong point of the Nokia 8. This is done in 360 degrees using three microphones and has little distortion. This makes it ideal for recording loud concerts.

Click above for more pictures taken with the Nokia 8

If you instal a different camera app, it turns out that the hardware is capable of more. It is to be hoped that Nokia is currently quietly improving the software.

The substandard camera performance and lack of a notification light can be real killers for many people. For a flagship, especially a mediocre camera is out of date. Still, the Nokia 8 is in terms of design of both hardware and software a very pleasant device to use. Moreover, in theory, the drawbacks can be improved with software updates.

Should the price drop a little further, you can rest assured that you will get a device with above-average hardware for the price of a mid-range car. What's more, Nokia's fast software updates will allow it to last for a while in 2018 as well. All in all, Nokia's return to the phone market with the Nokia 8 is very promising.