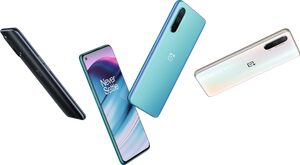 With the OnePlus Nord COOE 5G, OnePlus wants to give you "more phone for less money". In short, that comes down to a larger screen, with a great camera and a big battery for less money. On paper, OnePlus certainly seems to have succeeded but not without making some concessions. Which ones exactly you can read here.

The Nord COOE is a somewhat ironic phone. With the very first OnePlus Nord, OnePlus returned to its roots; an affordable phone with specifications that matter. This was followed by numerous Nord phones, after which the whole idea of the Nord became snowed under. With this Nord COOE, OnePlus is trying to return to the basics. COOE here stands for Core Edition. The Nord COOE is a bit lighter, a bit thinner and has specifications that people want. Including this time a 3.5mm headphone jack.

To put down a thigh of a mid-range phone, the OnePlus Nord COOE 5G is equipped with a 6.44-inch AMOLED screen with a maximum refresh rate of 90Hz. This means that you have a large screen at your disposal, more of a colourful display and smooth to use. The screen of the Nord COOE is equipped with an Always On function (AOD) which you can also personalise. So you have the time, notifications or an illustration always in view. At the top left of the screen is a 16MP selfie camera. This is no longer the double of the original Nord, which took up quite a bit of screen space. Still present is a built-in optical fingerprint scanner. Just as convenient.

Cameras with up and downsides

On the back, room has been made for a triple camera consisting of a 64MP main camera with f/1.79 lens, an 8MP camera with 119° ultra-wide-angle lens and a 2MP mono lens for depth recognition. That's one less sensor than previous Nord models; OnePlus wisely left out the macro camera. It didn't add much anyway, aside from blurry close-ups. Unfortunately, the optical image stabilisation on the main camera has also disappeared. This makes focussing a bit more of a challenge. The pill-shaped camera module sticks out quite a bit, resulting in a lot of wobbling on the table. Something that can be solved with a case. Inside the Nord COOE, we find a Snapdragon 750G with built-in 5G support. The model with 128GB storage memory gets 8GB of RAM memory and the 256GB version gets a whopping 12GB. More than enough for a mid-range device. The battery measures 4500 mAh and can be charged quickly with Warp Charge 30T.