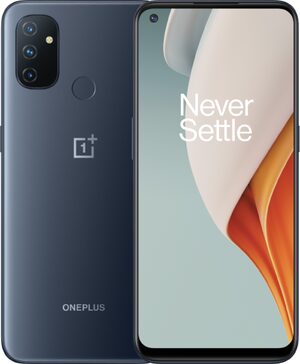 OnePlus Nord N100 in the news

The OnePlus Nord N100 is an affordable OnePlus phone from the relatively new Nord series. With this OnePlus wants to compete in the cheaper segment once again. At the time of release, this N100 was the cheapest model from the Nord series. And for that you get a lot in return. What exactly is something we are going to explain here.

We've already stressed enough that he's cheap. What do you get in return? A 6.52-inch screen to name a few. That's the biggest screen of all Nord models. By the way, this is not a high-contrast AMOLED panel like the Nord, but an IPS panel. However, it does have the same punch-hole for a selfie camera at the top. The resolution is 1600 x 720 pixels which is popularly called HD+. All other Nord models have a Full HD+ resolution, so also on sharpness you give something in. Nice is that the panel does at 90Hz. Images are refreshed 90 times per second and that results in smoother animations. Your device feels nice and fast.

No 5G, but a large battery

What's also missing is 5G support. In practise, this does not help you very much yet, as there is no national coverage at the time of hatching. However, you can with the Nord N100 'just' on 4G and he also supports the fast WiFi 5. Of all Nord models, this N100 the largest battery. He comes out at 5000 mAh. Extra fast charging with Warp Charge is not available, altho you can charge with 18 Watts fast. That's just not half as much as Warp Charge. Just like the Nord N10 is the fingerprint scanner on the back and not in the screen. However, this is not an immediate disadvantage; a physical fingerprint scanner is usually faster and more reliable.

On the camera front, the Nord N100 does nice business with a 13MP main camera, a 2MP depth camera and a 2MP macro lens. Three cameras in this price range is just very neat. The quality is fine but do not expect miracles. The camera on the front counts 8 megapixels and is strikingly enough equipped with the lightest lens of all; an f/2.0. The results of this are just above average. The selfie camera is also responsible for face unlock; they call it 'Face Unlock' at OnePlus. Nicely further are the stereo speakers and a headphone port. Where the N100 drops points is in performance. The Snapdragon 460 chipset is the least powerful chipset OnePlus has ever used.

Video about the OnePlus Nord N100

The OnePlus Nord N100 does the necessary consessions to get such a low price. But isn't it too much?