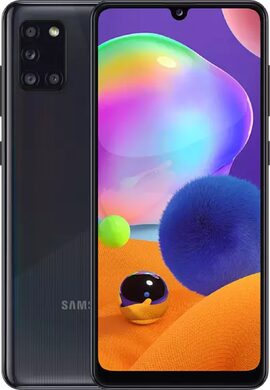 Similar to the Galaxy A31 and available

All Samsung Galaxy A31 reviews

Samsung Galaxy A31 in the news

The Samsung Galaxy A31 is an entry-level premium smartphone with a large screen and even larger battery. Especially the latter has improved considerably in capacity when compared to its predecessor. Another improvement; the arrival of an extra rear camera that brings the total up to 4.

We start this meeting with the camera of the A31. For such an entry level model, it is not common to find 4 cameras. And yet Samsung did. It concerns a 48MP main camera, 8MP ultra-wide-angle lens, 5MP depth camera and a 5MP macro camera. This is a very multifunctional whole where you have a suitable lens at your disposal for many situations. For example, you shoot razor-sharp photos full of detail with the main camera, a wider image up to 123° with the wide-angle lens, portrait photos with the depth camera and extreme close-ups, for example of insects, with the macro lens. The Galaxy A31 is even equipped with Live Focus where you can see the sharpness/depth effect of the depth of field camera live on screen. What the camera does miss is a special nite mode and 4K video.

Having a good camera is fun but looking back on a good screen is also important. Samsung has equipped the Galaxy A31 with a modern 6.4-inch Infinity-U screen. This means that there is a U-shaped notch at the top for the 20MP selfie camera. Samsung also makes Infinity-V screens, but that is notch because of the shape. The screen gives a sharp image thanks to the high Full HD+ resolution and the AMOLED technique ensures bright colours and deep blacks. Another advantage of the screen is that it incorporates the fingerprint scanner. Modern, safe and fast. Please note that self-purchased and installed screen protectors sometimes do not work well with the On-screen Fingerprint Scanner.

The Galaxy A31 is located fairly at the bottom of the A-series. That makes it nice and cheap, but not without concessions. For example, the back is made of plastic that comes in various striking Prism Crush colours. The built-in processor isn't really powerful either. It handles every-day tasks effortlessly. This is especially true for the model with 6 GB of RAM memory, but it is not sold everywhere. In most countries you're stuck with up to 4 GB. It won't be able to run heavy games. Fortunately, on the other hand, the A31 is equipped with a thick 5000 mAh battery. More than enough for a day of intensive use. Charging can be done with up to 15 Watt which qualifies as fast charging but given the large size of the battery it still takes 3 hours before your battery is completely full again. In terms of software, Samsung promises to provide updates until July 2022.

All Samsung Galaxy A31 specifications