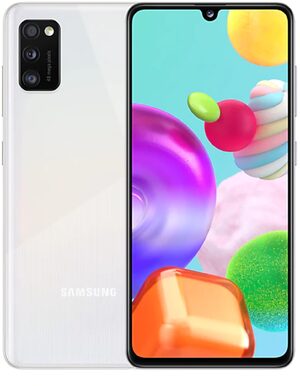 Pro and cons Samsung Galaxy A41

All Samsung Galaxy A41 reviews

Samsung Galaxy A41 in the news

The Samsung Galaxy A41 is an affordable mid-range camera with a triple camera on the back. Besides a 48 megapixel camera, it is an ultra-wide-angle and depth camera. What is also great is its 6.1-inch large Super AMOLED screen from which colours seem to splash off the screen. Whether this makes him a good phone is something we are going to find out here.

The Galaxy A-series is Samsung's most popular series. Especially the recent models are very competitive and offer a good price/quality ratio. Compared to its predecessor, this A41 is a bit larger with a 6.1 inch AMOLED panel. At the top, there is a notch in the middle for the 25MP selfie camera to which it owes the name Infinity U. Tidy is the high Full HD+ resolution which makes images sharp. AMOLED technology ensures bright colours, even in day-light. And another advantage of AMOLED; black is also real black. This results in spectacular contrast values. Also convenient from the screen; it has a built-in fingerprint scanner. Tastefully modern and so safe.

A nice screen is nice but good cameras are more fun. On the back of the Galaxy A41, Samsung has placed three sensors; a 48MP main camera with an f/2.0 lens, an 8MP ultra-wide-angle lens for landscapes, and a 5MP depth camera. A separate sensor for zoom is missing, but you can zoom in digitally on the 48 megapixels of the main camera. This may not be the sharpest method, but in most cases it is sharp enough. The wide-angle lens has an angle of view of 123° so that entire buildings or landscapes can be seen and the depth camera is useful for self-portraits where you can blur the background. The A41 lacks some playful camera functions such as video-slowmotion but the basis is there. Moreover, you may wonder if you will use those exotic functions that some more expensive camera phones have.

The Galaxy A41 is powered by a proprietary octacore processor with 4GB of RAM and 64GB of storage. These are entry level specifications for phones with these prices. And yet, according to Samsung, that's enough to play along with. This is helped by Game Booster. This mode ensures optimal performance and thanks to Frame Booster you won't miss frames so that games have smooth animations. Fun but then you need a full battery. The A41's built-in battery has a capacity of 3500 mAh. That's not spectacularly large, but it's enough for most people. Moreover, you can quickly recharge it when it is empty.

All Samsung Galaxy A41 specifications

Video about the Samsung Galaxy A41

If you don't like pictures so much as moving images; here you can see the future Samsung Galaxy A41 from all sides