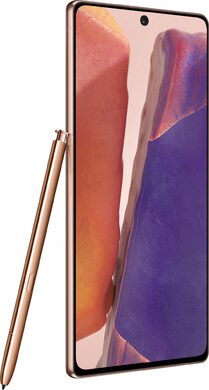 The Samsung Galaxy Note 20 4G is, as its name suggests, the 4G version of the Note 20. The lack of 5G makes it a bit cheaper. The screen, the cameras and of course the S Pen remain the same. In this description we are going to explain what you can get out of that.

A Note-telephone is only considered if you need the S Pen. For example, to take notes but also to control your phone. If you do not need that pen but still need a powerful phone we recommend the S20. You keep the S Pen in the Note 20 itself and it contains even more features this year. Now you can even write notes on the lockscreen and text recognition automatically converts your scribbles to written text. Ready to be copied. Or synch with your PC because Samsung Notes now keeps files neatly synched between all your devices.

As in previous years, the Note 20 is an extremely powerful phone. Inside is an Exynos 990 processor from Samsung itself. Because Samsung makes the hardware and software itself, they can both tune in better to each other. This only benefits the speed. Expect smooth performance from this Galaxy Note20. That is always handy to have, but short jumps are of no use to you. You want a phone that will last you a day at full power. Luckily, there is a 4300 mAh version built in with fast charging. If it does get empty, the battery will be half full again in half an hour. The 25W quick charger is just in the box altho you can also charge it wirelessly. You can even use it to charge other devices wirelessly. Your Galaxy Buds Live for example. Just by putting the box on the back.

The Note 20 4G has 3 cameras on the back; a 12MP primary camera, 12MP ultra wide angle and a 64MP telephoto to zoom with. Usually we see that most megapixels go to the main camera and not to the zoom camera. In itself, 12MP is enough to take sharp photos, so that choice is not that crazy. Because Samsung uses extra large pixels of 1.8?m, the sensor captures enough light to take well-exposed photos in almost every circumstance. The Note 20 can zoom 3x hybrid and digitally it can stretch that up to 30x. Pure optical zooming is unfortunately missing, a pity because the Note 10 could still do that. There is optical image stabilisation (OIS) for sharper images and video can be recorded in up to 8K. Because of that high video resolution, you can zoom in on a video afterward without loss of quality. At the front is a 10MP selfie camera behind a relatively small punch-hole. The only pity about that screen is the relatively low 60Hz refresh rate. Animations don't look as smooth as on a 120Hz screen. All in all a very complete phone. And if you don't necessarily need 5G then you can save a lot of money by going for this Note20 4G.

The Samsung Galaxy Note 20 4G is considerably cheaper due to the lack of 5G. And that makes it an ideal gift to make someone very happy with it.