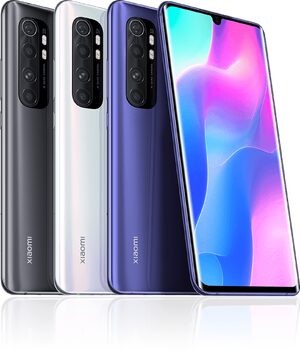 The Xiaomi Mi Note 10 Lite is a big smartphone for a small price. At least that's what its name suggests. The reality is slightly different. We'd like to explain to you what we mean by that.

The Note-series of Xiaomi is known for its large size. As a rule it is, but this Note 10 Lite has a smaller screen than the Mi 10 Lite. At the front we find a 6.47 inch large model of the colourful type AMOLED. The screen is slightly curved at the sides which looks premium but which you have to luv. This rounding is also found on the back. Both sides are made of Gorilla Glass 5 for extra protection. The screen also plays a big role in unlocking the Note 10 Lite. Not only does it include the fingerprint scanner, but also facial recognition thanks to the selfie camera at the top in a notch.

Now that we've covered the front of the Mi Note 10 Lite, it's time to turn it around. There we find four camera sensors, the largest of which measures 64 megapixels. We used the Sony IMX686 sensor that Xiaomi uses more often in its phones such as the Poco F2 Pro. Underneath is a 2 megapixel macro camera for extreme close-ups. At the very top is an 8 megapixel camera with ultra-wide-angle lens for landscapes and groups and the lens underneath is the 5 megapixel depth sensor. With the 5 megapixel depth sensor, you shoot beautiful portrait photos with an extra blur in the background. This usually results in more beautiful photos. Shoot videos in up to 4K and there is a special vlog mode available where you can add effects to your videos after which you can immediately share them online.

There's one more feature worth mentioning on the Mi Note 10 Lite and that's its battery. It is with 5260 mAh remarkably large and in theory more than enough for 2 days of use. Charging can be done with up to 30 Watt which is quite a lot but considering its battery capacity is also good. Otherwise it would take a long time to fully charge the battery and that's not so bad now. You will also find inside a Snapdragon 730G what is a solid chipset with which you can play games. There is a regular headphone port, infra-red, an FM radio and NFC. All in all a solid phone with versatile camera system and very large battery. And not entirely unimportant; a not so high price tag. Please note that the memory is not expandable. If your budget allows it, we therefore recommend the model with 128GB of storage memory. This is because the 64GB model does not have 64GB free storage but less. The system files such as Android also take up space.

The 64MP camera sensor on the Xiaomi Mi Note 10 Lite is so big that you can use it to capture the starry sky. How to do that is explained in this video

Epic camera, epic screen. According to Xiaomi, that's the success storey of the Mi Note 10 Lite.