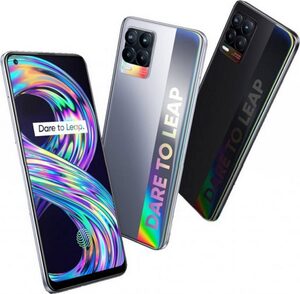 Similar to the 8 and available

The realme 8 is a stylish 4G smartphone with low price. It is also a smartphone that wants to be seen and that likes to show itself off. We admit that this all sounds a bit cryptic and that's why we're going to discuss this device a bit more in depth in this description.

In a world where almost every mobile phone looks the same, the Realme 8 still does its best to stand out. Especially the Cyber Silver version with its colourful and mirrored back. The Cyber Black and Punk Black versions also play with the light, but are a bit less flashy. Not only the back is colourful, but also the front. That is because Realme uses a Super AMOLED screen. With a generous size of 6.4 inches and with integrated fingerprint scanner. Images are very lively as a result and the FHD+ resolution ensures they are sharp too. The maximum peak brightness is 1000 nits which ensures good readability outdoors. Only downside we can think of is that the screen is 60Hz fast. So those extremely smooth animations you see with 90 and 120Hz you don't get with the realme 8.

On the back of the realme 8 we find a quadruple camera consisting of a 64MP main camera with f/1.79 lens, an 8MP ultra wide angle with 119° angle of view, a macro lens for sharp shots from 4cm close and a mono lens for black and white shots. The latter 2 are both 2MP and therefore not as useful as the first 2 in practise. Despite the lack of OIS (optical image stabilisation), these do stand up quite well and shoot some nice pictures. The camera app has some funny features such as a Tilt-shift mode. Photos then look just as if you are photographing a miniature city. The 16MP selfie camera also has its own bag of tricks. For example, it has Super Nightscape, so that you can take clear selfies in the dark. Also handy is Dual-view Video, where you shoot video with both the front and rear camera.

Within this price segment, the name MediaTek is a common one. They also provide the processor for this Realme 8. It is a Helio G95 that is equipped with eight cores at up to 2.05GHz. Realme has built a separate gaming mode that will make your games run smoother without any hiccups. The version with 64GB storage has 4GB of RAM memory, the model with 128GB gets 8GB. The larger the RAM memory the less often the realme 8 has to close apps and the faster switching between apps is. Inside is a 5000 mAh battery with 30W fast charging. That's pretty neat considering the retail price. Other notable point is Dual SIM support with a separate slot for a memory card.

Videos about the realme 8

This is realme. A company that makes stylish electronics like the sleek realme 8. Actress Michelle Dilhara shows you more about it in this video

Phones boring? Not at all! Especially this Realme 8 in Cyber Silver. In this video you'll get to see it and find out what it can do

In this video we welcome the realme 8 5G and specifically the box it comes in. What's in it?

Suppose you buy a realme 8 but first you want to know what's in the box. That is exactly a question this video can answer