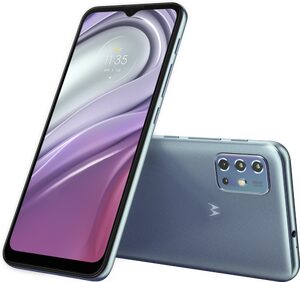 The Motorola Moto G20 is a simple Android smartphone that is fairly similar to the previously announced Moto G30. In terms of price, they don't differ that much either. So which one should you get and which one is the most sensible choice? We're happy to explain it here.

The short answer: you need the Moto G30. It's considerably more powerful, has a better camera and costs almost the same. If you want to know more or if you are stubborn, you can always continue reading. Up front, we find a fully flat 6.5-inch screen with a high 90Hz refresh rate. The latter is interesting; we usually only find it on more expensive models. It allows for smoother transitions, for example when scrolling. Also similar to the G30 is the built-in 5000 mAh battery. It is big enough for a battery life of 2 days.

On the back of the Moto G20, we find a quad camera system of 48MP. The maximum resolution is thus slightly lower than the 64MP of the G30 altho it will be quite enough for every-day snapshots. There is also an ultra wide-angle camera with 118° viewing angle, a 2MP depth camera for a portrait mode and a 2MP depth camera. Optical image stabilisation is missing but an electric variant is present. The selfie camera has a 13MP sharp sensor that can also be used to shoot group selfies.

But then the big pain point of this Moto G20; the processor. Instead of one from Qualcomm (like the Moto G30), or even a MediaTek, the relatively unknown UNISOC T700 has been chosen. This Chinese manufacturer was also formerly known as Spreadtrum and we do not find their products in the most powerful products. The speed of this octa-core processor does not exceed 1.8GHz and therefore, the G20 is not really smooth. It is cheap, but as mentioned, so is the G30. The difference is so minimal that we actually recommend going for it. Not nice for this G20 but it is fair to you.