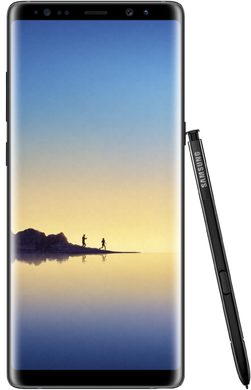 Similar to the Galaxy Note 8 and available

The Samsung Galaxy Note 8, sometimes written as one word Note8, is the largest flagship of 2017 with built-in S Pen. With this a pen you can not only operate the phone, you can also make drawings. We will try to explain here what else is possible.

It is brave of Samsung to release another model in the Galaxy Note series after the highly inflammable Note 7, but enough about that. The fact is that Note 8 is the largest Galaxy phone of 2017. The display measures 6.3 inches from corner to corner. Ideal for those who can't get it big enough. Yet the screen is only 0.1 inch larger than the Galaxy S8+. There are more similarities with that device. For example, the Infinity Display is the same. That is a type of screen without any noteworthy screen edges. No large bars above and below the screen. What is new is that this screen can be operated with the built-in S Pen. You can even draw on a turned off screen. Useful for writing notes or cat calls that you shouldn't forget.

For the first time Samsung applies a dual camera in a Galaxy phone. It is the same module as in the S8, but then the Note 8 has two of them. Both cameras have optical image stabilisation (OIS), which makes sharp photos more likely. One camera is equipped with a wide-angle lens, the other with a telephoto lens. With the first you shoot the 'normal' pictures, with the other you can zoom in. You can even take photos from both cameras simultaneously so that you can decide later on what exactly you want to zoom in on (Dual Capture mode). You can also use the Dual Camera to blur the background so that the subject is better highlighted. You can even adjust this later. Altho Note 8 is not the first smartphone that can do this, it is the first Samsung where this is possible.

Samsung has pulled out quite a bit to turn the Galaxy Note 8 into a powerhouse. That seems to have worked out quite well on paper. The housing is waterproof, it can be charged extra fast wirelessly, there is an iris scanner to log in with your eyes, the latest and fastest processor (10nm) has been used and there is a generous 6 GB of RAM memory available. Even the battery has been considered. It is extra safe because Samsung has gone thru a safety plan consisting of 8 steps, unique in this industry. However, the capacity is relatively low; 3,300 mAh. That is even 200 mAh lower than in the S8+, possibly because space was needed for the S Pen. Nevertheless, Samsung still promises a battery life of one day. It is already the umpteenth time that we make the comparison with the S8+ and that is not for nothing; both are very similar. So, if you can miss the S Pen and you do not think the double camera is that important, then you can go for the Galaxy S8+ at a better price.