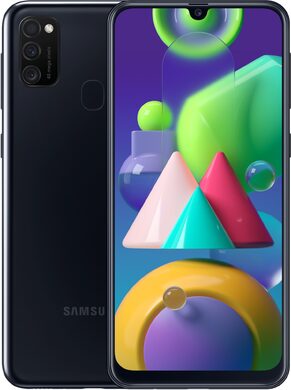 Similar to the Galaxy M21 and available

The Samsung Galaxy M21 is a mid-ranger from Samsung's M-series. M-models are known for their large battery. Whether that is also true for this M21 is something we are going to find out. And then we will immediately look at all its other plus and minus points.

The housing of the Galaxy M21 is streamlined with rounded glass and a glossy finish. In other words, the M21 lies comfortably in the hand without sharp corners. This is a plastic housing, also known as polycarbonate. This has the advantage that it is reasonably strong and never feels cold to the touch. This is of course convenient during a cold winter, but it is usually found to be less premium than, for example, metal or glass. Samsung has done this in order to keep the costs as low as possible. Now Samsung has phones in its assortment that are cheaper, so it is more likely that Samsung has put that money into other things. A larger battery for example. The one in the M21, with a capacity of 6000 mAh, is very large. A battery life of 2 days is therefore certainly feasible.

Samsung has further equipped the Galaxy M21 with a more than 6.4 inch screen. They themselves call it an 'Infinity-U Display'. That 'U' is a reference to the u-shaped notch for the 20MP selfie camera. That is spacious enough for sharp self-portraits. There's even a Live Focus function with which you can add a blurry background to your selfies. Your selfies stand out more and generally look better. On the back there are 3 more cameras; a 48MP main camera with lots of detail, 8MP ultra wide angle lens with 123° angle of view and a 5MP depth camera. Thanks to this Triple Camera you have enough resources in hand to take beautiful pictures. Videos can be shot in a maximum 4K resolution and there is a slow-motion option of 240fps.

The Samsung Galaxy M21 runs under its own chipset; the Exynos 9611 on a maximum clock frequency of 2.3 GHz. This is an octa-core processor, i.e. consisting of 8 cores. Combined with 4 GB of RAM memory, this is enough for every-day activities. Gaming will also be possible but don't expect miracles. Samsung did add a special feature called Game Booster. Once activated, it monitors the temperature and memory usage and adjusts the settings accordingly. Game Booster can also disable notifications and Bixby so that they do not bother you during gaming. Finally, the storage memory is 64 GB and can be expanded by up to 512 GB via a memory card. More than enough for all your content.

Videos about the Samsung Galaxy M21

This YouTuber would rather go for the Samsung Galaxy M21 than the M11. She has her reasons for doing so, as she explains. But the M21 is also a bit more expensive than the M11. In other words; pros and cons

Samsung introduces the Galaxy M21; a phone with gigantic battery, colourful and sharp screen and a 48MP triple camera