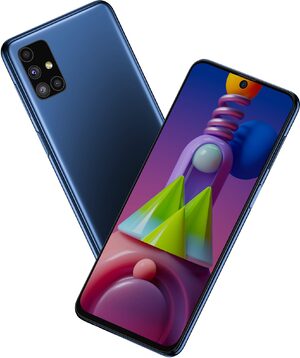 Samsung Galaxy M51 in the news

The Samsung Galaxy M51 is a smartphone with a huge battery aimed at young people. The battery capacity of the M51 corresponds to some powerbanks; 7000 mAh. More than enough to last several days without recharging.

Not just a big battery

You buy the Galaxy M51 in the first place for its large battery, but it has more to offer than just long endurance. For example, it's fairly powerful thanks to a powerful processor and features a colourful, high-contrast Super AMOLED Plus display. The advantage of that plus is that there are 12 subpixels per pixel, which results in sharper images. The 6.7-inch screen makes it one of the larger phones. The housing has been kept as compact as possible by placing the screen tightly against the edge. As a result, the selfie camera could not be placed in any other way than in the screen. Not in a notch but modern in a hole.

Usually we see that Galaxy M models are not equipped with the most extensive processor. This M51 seems to be the exception to the rule. The Snapdragon 730G is only one step away from the top segment. It makes it very powerful and fast. What also helps is the large amount of RAM memory: 6GB. You store your own content on the 128GB of storage memory. If that's not enough, simply insert a memory card. The M51 reads cards up to 512GB. Besides a memory card, it also accepts 2 SIM cards. Handy because you can be reached on 2 different numbers.

But does the Galaxy M51 also shoot some good pictures? Samsung has equipped it with a 64MP main camera. Now you have to look beyond the number of megapixels. The lens tells its own storey. There we find a bright f/1.8 lens. That's fine, even in low light. Furthermore, there is a 12MP ultra-wide-angle with a 123° angle of view, a 5MP depth camera and another 5MP macro camera. Most of the photos are taken with the 64MP camera. Widescreen photos of, for example, landscapes with the wide-angle camera, portrait photos with the depth of field camera and extreme close-ups with the macro camera. The number of cameras combined with the large number of filters and effects it has makes it very versatile. Disadvantage could be the thickness; the large battery has to be somewhere.

Videos about the Samsung Galaxy M51

Is the Samsung Galaxy M51 a phone with a ridiculously large battery or is it a power bank you can use to make calls with?

Those who want a large phone battery usually have to do consessions. Often on the processor. Not with the Samsung Galaxy M51. It has a very powerful Snapdragon 730G

Does your phone battery run out that fast, too? With the 7000 mAh large battery in the Samsung Galaxy M51, that won't happen any time soon.