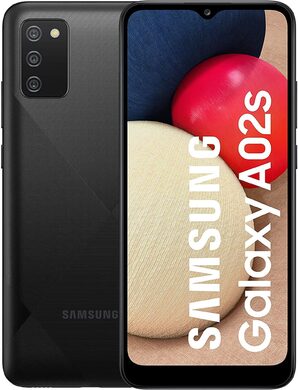 Samsung Galaxy A02s in the news

This Samsung Galaxy A02s is part of Samsung's affordable A0 series. So expect a low price, but does that make it cheap? As we now know by now; you get what you pay for. So does this make the A02s a phone you should buy? Let's find out here.

Screen with pros and cons

Samsung provides the Galaxy A02s with a large screen. 6.5 inches to be exact. The screen edges are also nice and thin. We only find some space at the bottom; the so-called chin. At the top, there is a small V-shaped indentation for the selfie camera. That is why Samsung calls this screen Infinity-V. The resolution is a bit disappointing; HD+. Images are sharp, but text is less so. Another pity is that a traditional TFT panel was used instead of a bright and colourful AMOLED panel. The advantage of the latter is that they are easier to read outdoors.

For such a cheap phone, the number of cameras on the back is remarkable. The Galaxy A02s has 3 of them, namely a 13MP main camera, a 2MP depth camera and a 2MP macro camera. You shoot most of the photos with the 13MP camera. If you use the portrait mode or want to blur the background a bit more (Live Focus), then the depth camera jumps in. You can shoot extreme close-ups with the macro camera. Unfortunately, the 2MP resolution is so low that we question its usefulness. It would have been better to leave it out or to exchange it for an ultra-wide-angle camera. This would give you more in the picture, which is handy for landscapes or groups. But as mentioned, that is unfortunately not the case with this A02s.

The Galaxy A02s has a decent built-in battery. With a capacity of 5000mAh, it looks rather large. You can also charge it relatively quickly; with a maximum of 15W. That is just as fast as Apple's iPhone 12. The biggest complaint we have about the A02s is the processor. Samsung did choose for a Qualcomm Snapdragon processor which are well regarded but unfortunately they grabbed the Snapdragon 450 from 2017. The Snapdragon 4xx series is already the least powerful and a years old chipset doesn't make it much better. So the A02s is not the fastest smartphone you've ever come across. Oppo, Motorola and Nokia have phones with an equivalent price tag in their range that are also worth considering.

Video about the Samsung Galaxy A02s

Does the Samsung Galaxy A02s get a thumbs up or thumbs down? In this video we put it thru its paces.